What in the World Happened? - First Quarter (video transcript)

Hello! I'm Josh Wolberg and this is the first quarter market review of 2021, or what we like to call “What in the World Happened”. Your quarterly performance reports are available on the portal for clients. We're going to do update of investment markets, the economy and Covid-19. 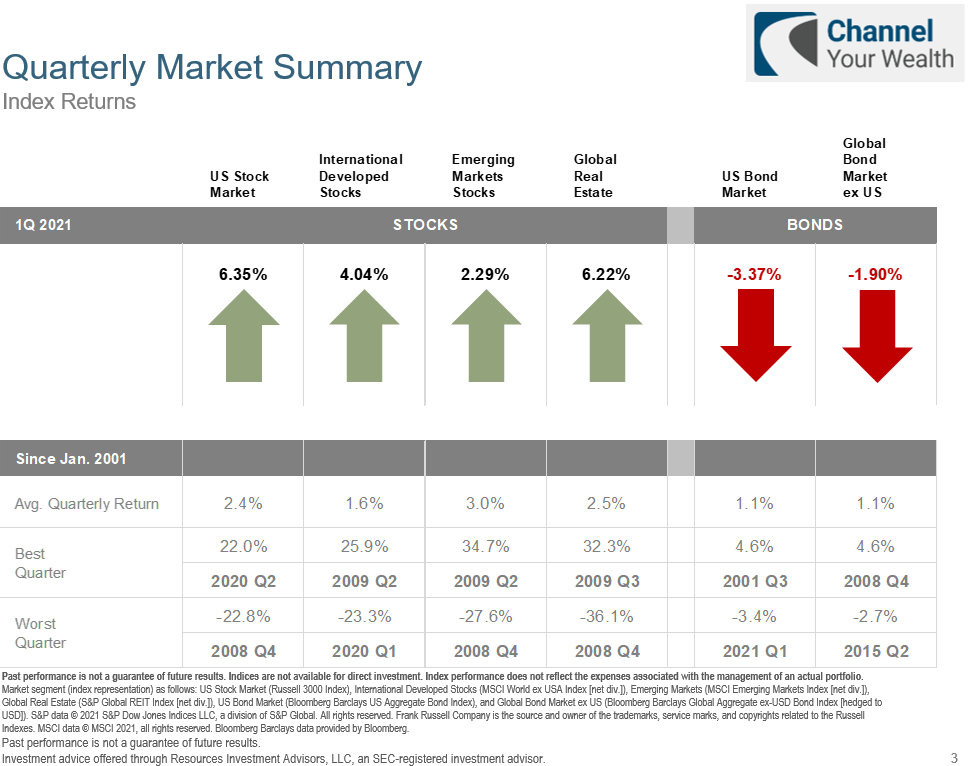 In the first quarter of 2021 stock markets around the world did pretty well. Anywhere from 2-6% up, and most of those were above their average quarterly returns for the last 20 years. Now the bond market tells a very different story. So, as interest rates went up in the first quarter of 2021 bond prices in the US and around the world went down. There's two sides of that coin. One side of it is that, obviously, we don't like any portion of the portfolio going down, but the positive spin on that is as stocks have continued to go up, and we've needed to rebalance anyway, we've sold stocks at a gain and we've been able to buy bonds at higher interest rates (paying higher interest rates than they have in recent months) taking advantage of having different parts of the portfolio getting cheaper and more expensive over time. 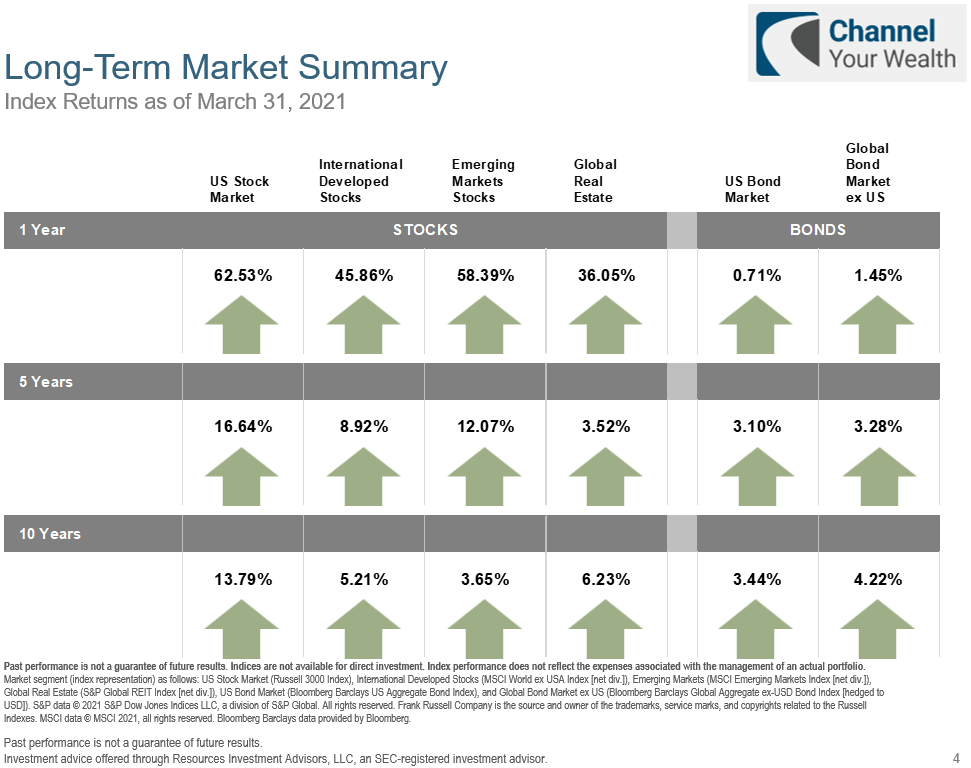 Even if markets go sideways for multiple months, as long as we're buying the thing that got cheap and selling the thing that got expensive and vice versa, multiple times, even if investment markets go sideways, we can take advantage of that volatility over time. The other thing I’ll say about bonds is you'll notice that the first quarter of 2021 was actually the worst quarterly performance for the US bond market in the last 20 years and even though that was the worst performance over the last 20 years in the US bond market it's still significantly less volatile than stocks, so stocks can be down 20-35% in a particular quarter, whereas bonds our worst-case scenario is 2-3% in a quarter. 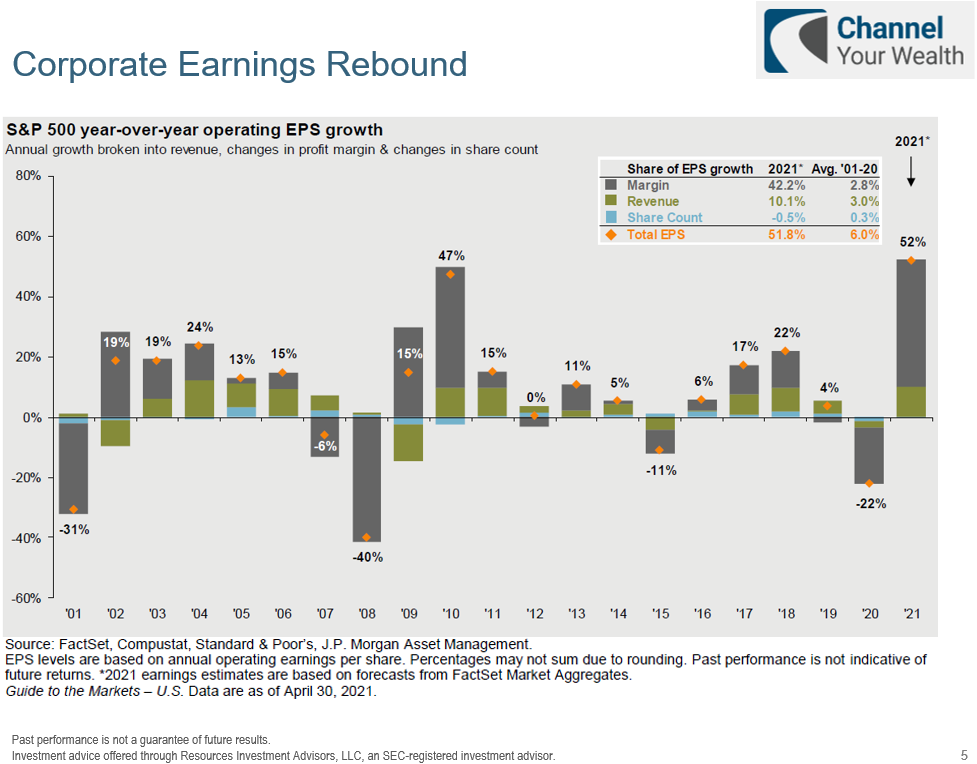 Even though we had negative performance in bonds in the first quarter of 2021 you'll notice the 12 months ending March 31 of 2021, that both US and non-US bond markets were positive for that time and, obviously, stocks did really, really well as we recovered from the depths of last March 2020. One of the reasons for that rebound is corporate earnings. So, earnings per share for the S&P 500 didn't go down near as much in 2020 as is feared; it's down 22% year over year versus earnings were down 46% combined 2007 and 2008. In the recovery so far - in 2021 earnings have gone up already more in 2021 than they did about 18 months after the depths of the financial crisis, so the rebound has been better and the depths weren't as low, as we originally feared of coronavirus, at least for corporate earnings. 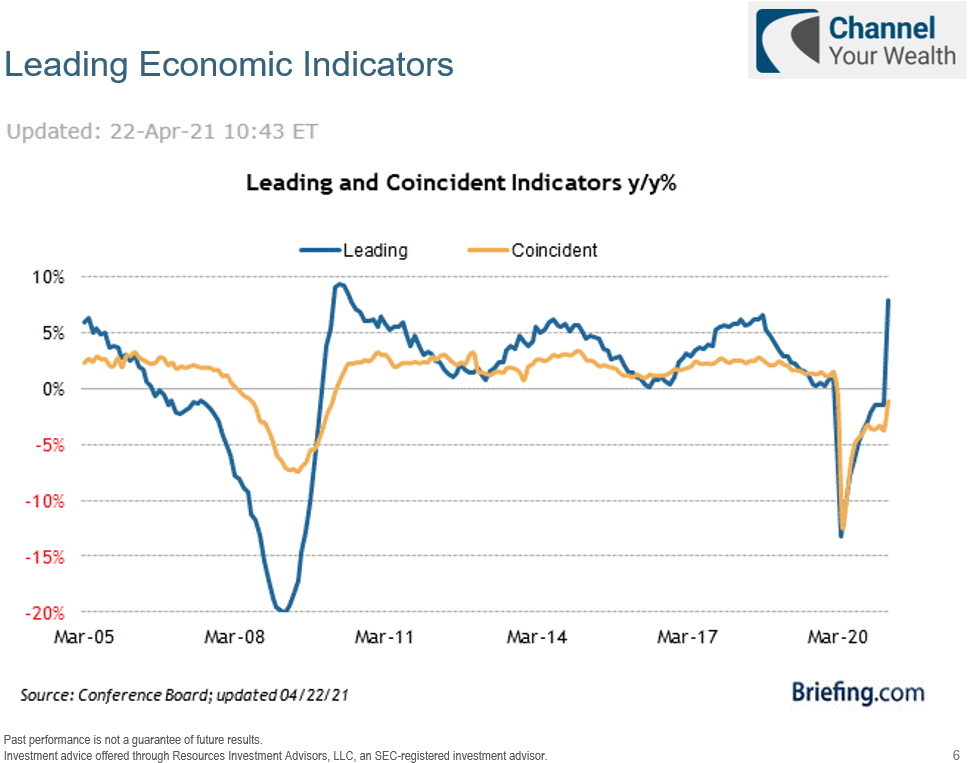 When you zoom out a little further, we have leading economic indicators, which includes employment, interest rates, expectations and consumer sentiment. All those things are rebounding very, very quickly and you'll notice this blue line here is leading economic indicators. When you go back it's basically the highest reading since 2010, when we were in the most robust part of the recovery from the financial crisis. We still have a lot of restrictions around the US around Covid; the economy isn't fully open, all of the stimulus money hasn't fully been spent and we're already having high leading indicators over time, so this recovery might be just at the beginning of its robust phase. We see that as a positive going forward. 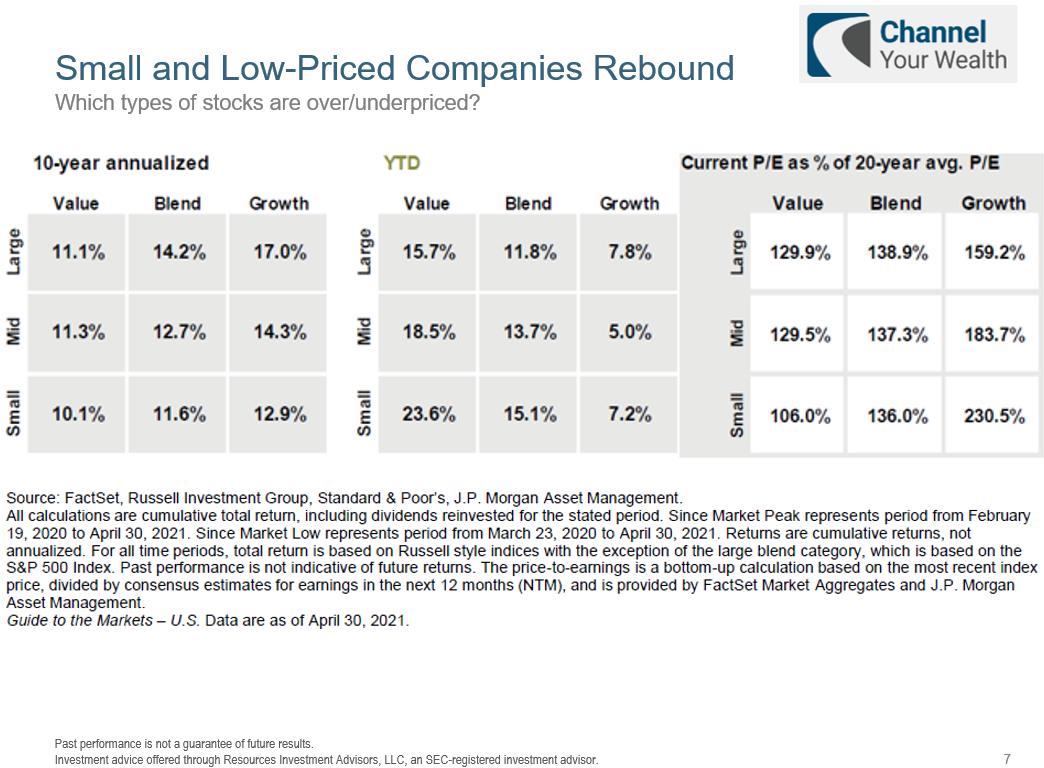 What does this mean for different parts of the market? One question I get is, “Well, markets have gone up so much, stock markets have gone up so much, doesn't that mean that things are overvalued?”. One of the things I’ll say is different parts of the market have different value - over or underpriced, or over or undervalued at different times. Over the last 10 years large growth has outperformed, on average, small value, but when you look at longer periods of time, say 20 plus years, small value has consistently done better than large growth. That’s because it's a little bit more volatile so there's higher expected returns. That really started to turn around in the fourth quarter of 2020. Small value did about 20% better, more than 20% better than large growth, just in the fourth quarter of 2020 alone. So far this year (four months to the end of April), small value has outperformed large growth by about 15%. Even though that's been the case, small value, as shown in this chart (the graph on the right is current PE ratio so that's the price of the stock divided by the earnings of the stock) is how much does it cost to buy a profitable company relative to how much does it cost to buy a profitable company in the past. When we look at 20 year averages a number higher than 100% means that we're paying a little bit more for profitable companies now than in the past. You'll notice on the growth side of this chart these numbers are really high, especially small growth. It's 130% more expensive than it has been in the past to buy a profitable small growth company. They're growing quickly, but you're paying so much for it, they have to grow quickly just to justify the price. Whereas small value we see is almost at its long term average, and with interest rates where they are this might actually be undervalued a little bit. So, we feel confident that small value over time - it might not be the next quarter, but over time, are going to continue to do better than large growth going forward. 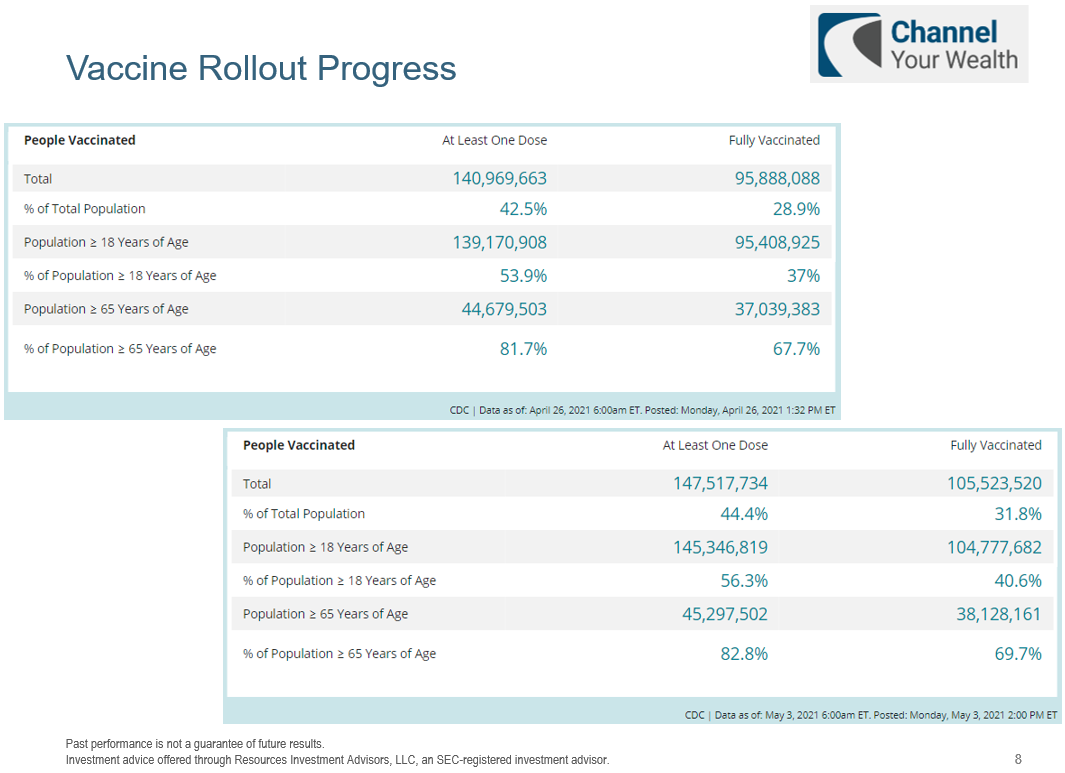 Alright, so let's talk about Covid progress. The vaccine rollout has exceeded a lot of people's expectations. Almost 150 million people in the United States (and it will be by the time you see this likely over 150 million) have received their first dose. What's really key about the first dose is that it is very, very effective at basically, eliminating the chance of hospitalization and eliminating the chance of fatality. It doesn't mean you won't get symptoms, but it gets rid of the worst outcomes of Covid and we've made extraordinary progress there. If you remember back to my previous video last quarter, we talked about one of the unfortunate stats of the pandemic is about 80%, or just over 80%, of the people who are passing away from Covid are age 65 or older. The thought was we were hopeful that if we got those people vaccinated as soon as possible we might be able to cut down on future fatalities and future cases (because they’re the most vulnerable cases, as well) by 80% in just a few months if we can get those people vaccinated. We're at about 83% of that population is vaccinated and what has happened is fatalities and confirmed cases across the board have gone down about 80% from January to the end of April and that's good news in a time that's been a really tough 13-14 months. We've made a lot of progress. We hope this goes down another 80% in the next three months or so. By the time I’m filming this next time I’m hoping we're back to a level pre-March 2020, as far as cases and fatalities in the US from Covid-19. That's important to think about from the standpoint of what does that mean for economic growth? It means that we can continue to open up and people will start to feel safer and start to feel more confident going back to a little bit more of the things they enjoyed in the past like eating, traveling, having services in person, not wearing a mask, being around our friends and family. I think that bodes well, not just for the American psyche, but also the economy. 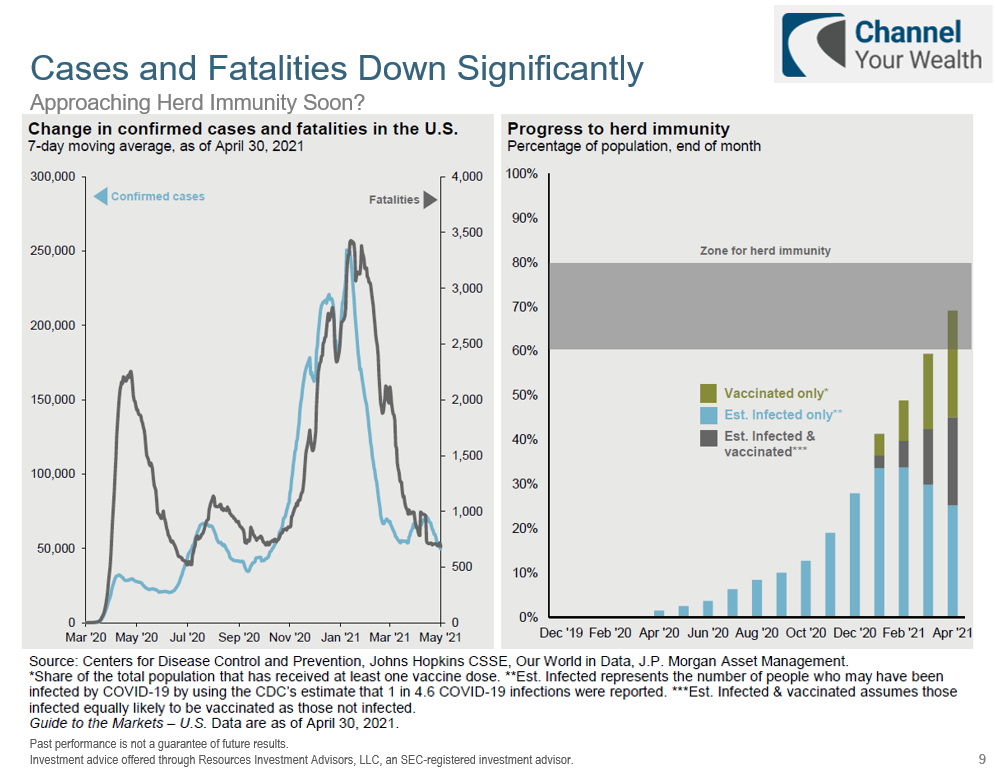 Now this progress towards herd immunity. I want to talk just a little bit about this. I think it's an interesting thing to keep an eye on because it's a combination of people estimated to have been infected, which is a much larger number than cases, according to CDC, and how many people have been vaccinated. We're starting to test that zone of herd immunity. Different epidemiologists say that's at a different level - some say it’s as low as 60% some say that it doesn't really kick in until over 90%. How I think of this is immunity - not as a 100% chance that nobody gets this again. It's are we robust enough in our collective immune system to be able to keep this to a level that's more like a seasonal flu, or having a few hundred thousand people hospitalized a year in a seasonal flu, and 10, 20, 30,000 people pass away, not hundreds of thousands and not millions of people being hospitalized over time. So, if we can get it to that point. I don't know if it will ever necessarily 100% go away, but if we can get it to the point where it's like other communicable diseases that really bodes well for the economy and, obviously, it bodes much better for just life on Planet Earth, for our species. So, I'm hopeful that next time I do this, that these numbers are a lot better than they are right now, as more people get antibodies.

Alright, so what are we going to do next? We're going to continue to monitor the economy and markets and Covid-19, as we always do. We're going to rebalance portfolios, as needed, so if stocks continue to go up and if bonds continue to go down we're going to sell stocks at a gain and buy bonds at lower prices. We will continue to manage cash in your account, so if you're in distribution stage we're going to have between four and eight months’ worth of cash in order to keep those paychecks coming in retirement. I'm Josh Wolberg. Thanks for watching. Stay curious, my friends.