This is the second quarter market review or what we like to call “What in the World Happened?” We are going to answer a few questions:

In the second quarter, stock markets around the world were up double digits, and bond markets were up 2-3%. These represent a higher than average quarterly return over the last 20 years. 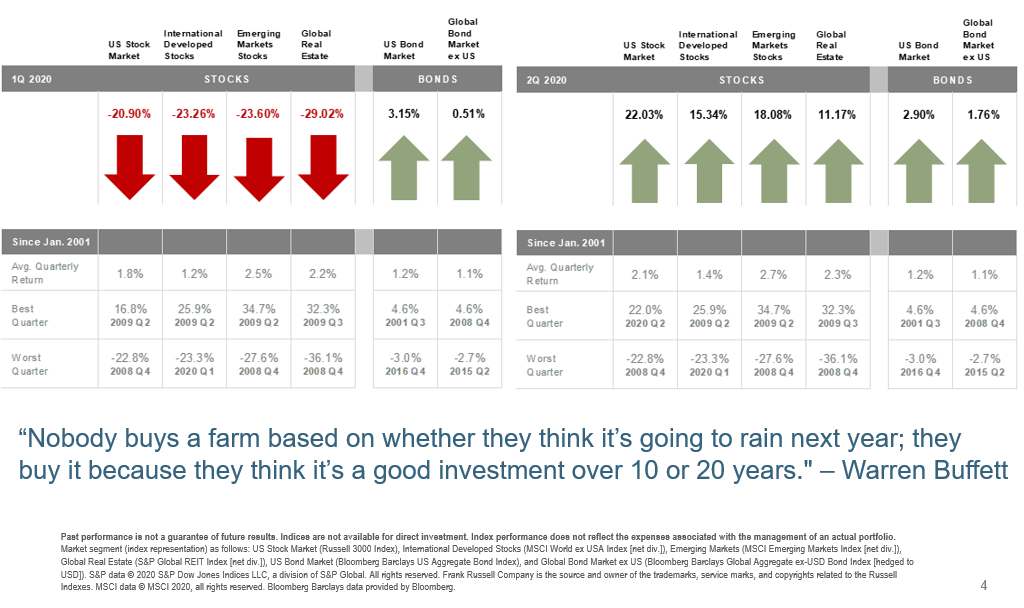 We are not just thinking about what's going to happen this quarter. Are we going to have good earnings or bad earnings in the next quarter or two? What’s the long-term implication on the market?

A lot of investors focus on short term. No one can predict the movements in the market, which leads to volatility, including the first quarter of 2020. It is as if investors are saying “Oh my gosh! It looks like we're going into a drought. Let's sell the farm now and get out of the farm until after the drought! Then, we'll get back in after the drought has ended.” That approach generally leads to bad outcomes according to academic research I’ll share in a little bit.

On March 23 (which is the market low in 2020 so far), more individual shares of stock were sold in the US than any other day in US market history. And the very next day, the market was up; one of the largest percentages in US history.

When you look at what investors were doing. According to information from Fidelity, almost 1-in-5 investors overall, and 1-in-3 of investors over age 65, sold 100% of their stock sometime during the COVID crisis. 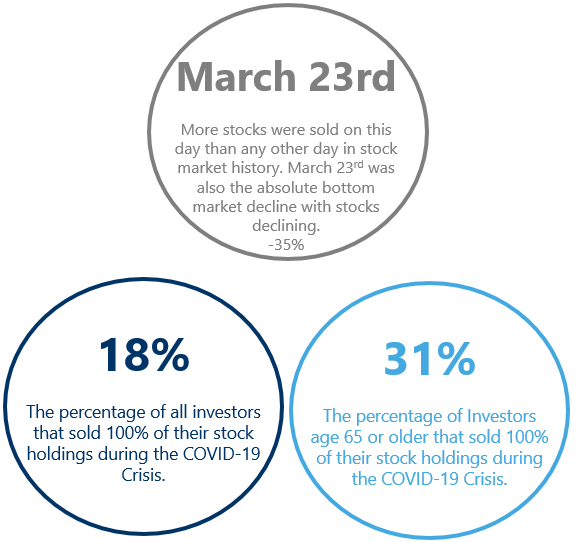 Investors are trying to do here is basically sell the farm before the drought or during the drought, hoping not to get back into the farm until after the drought is over. The problem is it's really difficult to do this and all the academic research show nobody does this well, whether individual investors or institutional investors. The more you trade, the lower your expected returns are.

The graph ranks gross and net investment performance ranked by quintiles of trading activity. Net returns get smaller as trading increases. This is consistent for individual or institutional investors. Nobody has a way to consistently predict what's going to happen and buy low and sell high.

Warren Buffett sums this up really well, “The stock market is a highly efficient mechanism for the transfer of wealth from the impatient to the patient”. The research says the exact same thing. 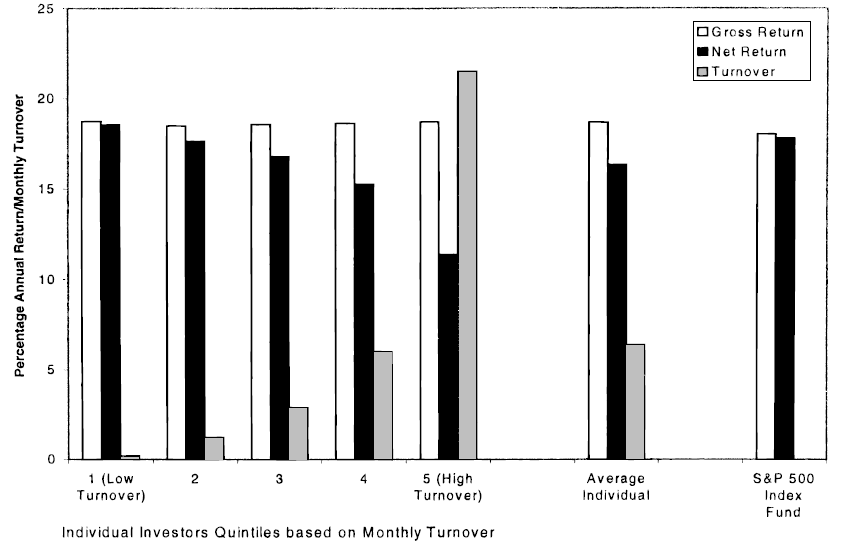 Source: “Trading Is Hazardous to Your Wealth: The Common Stock Investment Performance of Individual Investors” in The Journal of Finance by Brad M. Barber and Terrance Odean

The evidence supports one type of trading: buying low and selling high through disciplined rebalancing.

This graph shows the price changes of several major asset classes in 2020. The green line is long-term US Treasury Bonds (20 to 30-year bonds purchased from the US government). The gold line is a diversified portfolio of Treasury and Corporate Bonds, between 5 and 10 years to maturity. The other three lines here are US stocks, non-US stocks and global real estate.

Let’s look at an example portfolio with 50% stocks and 50% bonds and cash. In March, bonds went up as stocks went down and the portfolio would have been closer to 40% stocks and 60% bonds. Which gives us an opportunity to sell bonds at a gain and buy stocks while they are on sale. We did not know when markets were going to turn around and we certainly didn't expect them to turn around as fast as they did, but that's what happened, and rebalancing was the right move.

Since the market low on the 23rd of March, stocks have consistently gone up and has given us an opportunity to rebalance again, selling stocks at gains and replenishing bonds and cash.

A key to the right mix between stocks, bonds and cash is your specific needs in the upcoming years. To have enough money in bonds and cash for the next 10 to 15 years’ worth of living.

If you are 43 years old, you might not have need for money for the next 20 to 30 years before you retire (outside of an emergency fund). Hence, you might be able to have all your investments in stocks. Whereas somebody who is, say 65 and retiring at 67 might need to have 50% in bonds and cash because they will need to use some of their money over the next 10 to 15 years.

If you have enough bonds and cash to weather the storms in the stock market, you don't have to worry about markets being down in short term because you can wait for them to come back.

COVID-19 and the Economy (Short vs. Long-term)

Initial reports on COVID-19 in China and then Italy were catastrophic. It looked like 5% to 10%+ of those who contracted the disease were dying. It also appeared we couldn't slow down the rate of infection, which could mean 5% to 10% of the global population could die.

A pandemic of that magnitude wouldn’t just have short term economic effects. It would have long-term reverberations in the economy for decades. From an economic productivity standpoint, it would take 20+ years to replace the people who died. 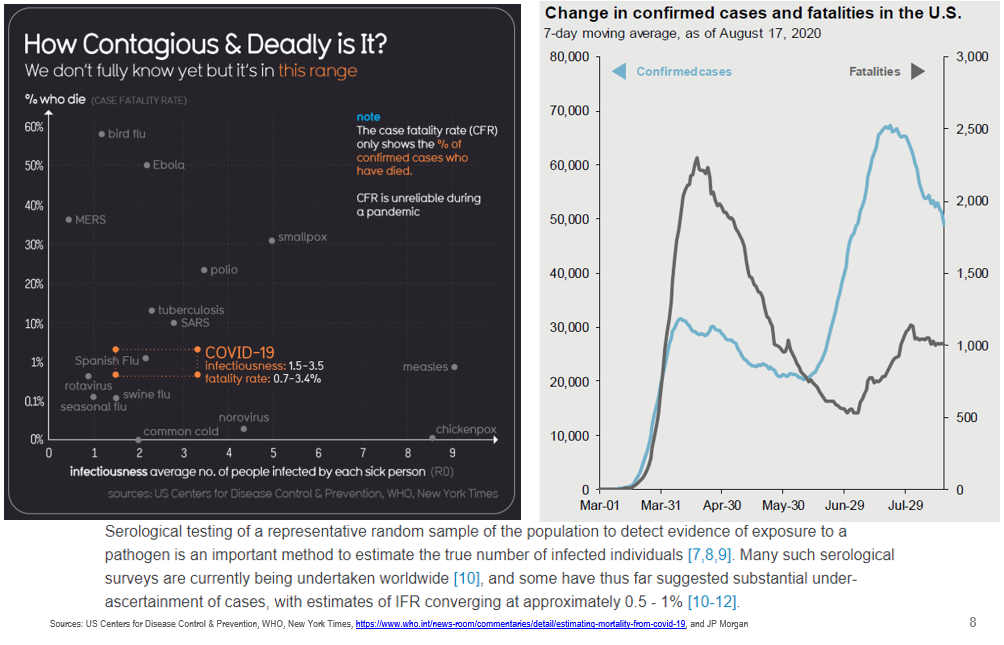 Thankfully, the death rate of COVID-19 is significantly lower than initially feared. According to data from the World Health Organization, somewhere between 0.5% to 1% of those infected have died. Reports from the CDC have similar estimates based on antibody testing estimating somewhere between 0.33% and 0.67%.

That is still serious, but it doesn't have the same sort of long-term economic effects as originally feared. Almost 1% of the global population passes away every year from all other causes like cancer, heart disease, accidents, etc. If we assume everyone got infected and we didn’t discover any better treatments than currently available, an additional 0.5% fatality rate for one year would have large short-term economic effects and it would be impossible to measure the emotional cost.

But long-term, it wouldn't have the economic effects originally feared. We'll use the Spanish Flu (1918 Flu) as an example. During that time, the world’s population was less than 2 billion and around 50 million people died from the pandemic over the course of 18 months. It had devastating short-term effects on the economy, but it is also one of the shortest recessions in the US history. And it was immediately followed by the “Roaring 20s”. From the CDC’s latest reports, the number of lives lost due to the COVID-19 pandemic is projected to a lot less than 50 million people and the world’s population is approximately 8 billion now.

Government Stimulus: Will it Cause Inflation?

Another reason stocks are up even though the economy has been down in the short-term is the level of government stimulus. Interest rates have been lowered across the board. This allows people to refinance and free up cash flow day-to-day. It also allows corporations to refinance and lower their cost structure.

Fiscal stimulus of over $3 trillion was pumped into the economy in the form of direct payments to individuals and forgivable loans to employers to keep people employed. To put $3 trillion in context, it is the largest percentage of stimulus issued since the end of the Great Depression and the beginning of World War II. So, it's a really big number.

All this stimulus has led many to ask: “Isn't this going to lead to inflation?” Maybe, maybe not. I'll use Japan as an example. About 30 years ago, Japan had about as much debt as the US does now as a percentage of their GDP. And over the last 30 years, Japan has consistently run budget deficits to the point where they have about three times as much debt as we do relative to the size of their economy. And yet, they have had no inflation for three decades and their interest rates are lower than ours. 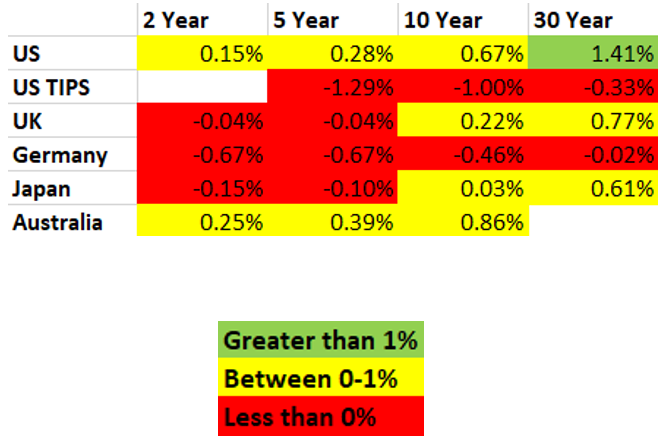 A look at the UK, Germany, Australia and advanced economies all around the world, you’ll see a similar pattern among countries with as much, or more, debt than the US. Yet they have lower interest rates and lower inflation. Although US interest rates are less than 1.5%, they are still higher than other economies around the world. Like Japan and others, the US might be able to accumulate debt for another 30+ years before experiencing inflation.

Lower interest rates can also contribute to higher stock prices. I teach an investments course at a local university. The first step in trying to determine the fair price for a stock is the underlying company’s current earnings and dividends and extrapolating how they may grow in the future. The second step is calculating much those future earnings and dividends are worth today.

We're going to continue to monitor COVID-19 and its effect on the economy and markets. We'll continue to rebalance as needed and manage cash for people in retirement. If stocks continue to go up, we'll sell stocks to buy bonds. If stocks go back down, we’ll sell bonds and buy stocks like we did back in March. Let us know if you would like to have a longer conversation about your portfolio.

Please feel free to share this with others if you found this helpful.